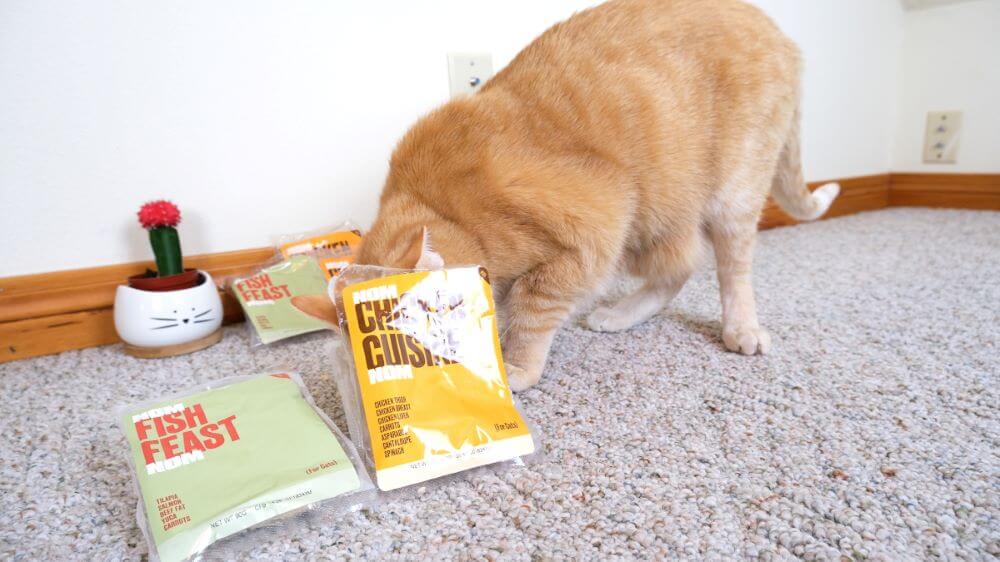 Nom Nom is a full-service pet food company that makes human-grade cat food and ships it to your door according to a custom schedule. It’s one among countless young brands that are using the subscription model to bring something new to an essential product.

So, what about Nom Nom? Is this the cat food subscription that’s going to change your life or just another fad-fueled dud?

After hours of research and hands-on testing, I’m thoroughly impressed with every aspect of the Nom Nom experience. The food has a strong foundation with outstanding ingredient quality and solid nutrition. And from ordering to customer service to watching my cats eat the food, Nom Nom offered a great experience every step of the way.

Over the last couple of weeks, I’ve been getting the full Nom Nom experience. We ordered a sample box with our own money—though we are a part of the Nom Nom affiliate program, we were not given free products for this review—and then tried the food out.

I took notes on every aspect of the experience. I evaluated the Nom Nom website, subscription process, and, once the food had arrived at my house, how my two cats reacted to the food.

Before we talk about my experience with Nom Nom, let’s find out where this food comes from.

The company behind Nom Nom cat food was founded back in 2015. Its original proposition was the same—it was a subscription pet food company that made homemade-style food and shipped it to people’s doors. Originally, the company only made food for dogs.

What kind of cat food does Nom Nom offer?

The company describes their foods as “fresh”—this means that they’re homemade-style foods that are made to order days before you get them. No extrusion, no canning, and no freezing mean that these foods have the taste and texture of something you might serve yourself for dinner.

Both Nom Nom recipes are made from human-grade ingredients, which means that, from farm to shelf, they’re produced and handled according to the United States’ regulations on human food. This sets the food apart from feed-grade products, which don’t have to meet official requirements for human food and may be made from lower-grade materials.

Where is Nom Nom cat food made?

The foods are manufactured in two company-owned facilities. Nom Nom owns a manufacturing facility in Oakland, California and another one in Nashville, Tennessee.

Has Nom Nom cat food ever been recalled?

As of April 2020, Nom Nom has never issued a pet food recall.

Here’s what happened when I tried Nom Nom cat food.

My Nom Nom experience started on the website. You have two options when getting started with Nom Nom. The first is to start a trial, which gives you a customer profile, customization, and gets you into the system for regular cat food deliveries. You can choose to have Nom Nom cat food shipped to your house according to a monthly, biweekly, or weekly schedule.

Your second option is to buy a variety pack, which allows you to try both recipes without any obligations. Your packages won’t be customized, but you will get a taste of the Nom Nom experience. I decided to order the Variety Pack, but not until after seeing what the signup process looks like.

When you start your trial with Nom Nom, you’re prompted to enter information about your cat, entering their name, sex, and breed. Your cat’s age, weight, body condition, and weight goals will tell Nom Nom how to portion out each packet.

Shipping and delivery went off without a hitch.

My order was confirmed on April 4th, prepared on the 6th, and arrived on my porch on the 10th. The food arrived in a refrigerated box and, by the time that I brought it inside at the end of a long day, the food was still fresh and cold.

Here’s what came in the variety pack.

Because I ordered the variety pack, my box of Nom Nom cat food included a sampling of packets of both Chicken Cuisine and Fish Feast.

What did the cats think of Nom Nom cat food?

Both of my cats, Wessie and Forest, seemed to love Nom Nom cat food.

While I was taking photos of the food for the review, I invited my cats into the room to take a look at it, hoping they might take a bite for the photoshoot. And they were all for it.

Wessie shoved his head into the pouch of Chicken Cuisine and started chowing down. Though he also ate the Fish Feast recipe, I think the chicken was his favorite. Forest, who can sometimes be skittish and unwilling to eat in the presence of others, hopped onto the display table and started eating a bowl of Fish Feast.

Over the course of the next week, my cats continued eating Nom Nom with enthusiasm. Wessie, in particular, appeared to relish the chunkiness of the food, dragging hunks out of the bowl and noisily ripping them apart.

Let’s take a closer look at both Nom Nom recipes, evaluating the products’ ingredients, macronutrients, species-appropriateness, and how my cats reacted to each.

Nom Nom’s Chicken Cuisine is a homemade-style food featuring chicken muscle meat and organs as its primary ingredient. In addition to chicken, the food contains chunks of vegetables, making it look a bit like chicken salad or something you’d put in a pie crust.

With carrots, asparagus, cantaloupe, and spinach on the ingredient list, the food may be meat-based, but it isn’t exactly a carnivore’s feast. Nevertheless, the food’s macronutrient distribution is right around where it should be.

What did my cats think of Chicken Cuisine? They loved it. Wessie, in particular, seemed taken with everything about this recipe. It’s fresh, bite-able food that has all the rich flavor of a freshly cooked chunk of chicken.

Nom Nom’s Fish Feast is primarily made from flaked tilapia and salmon with visible flecks of carrots and cassava.

At roughly 14% carbohydrates on a dry matter basis, this food is a little bit starchier than I’d like it to be. It appears that cats do best on a diet that’s 10% or fewer carbohydrates on a dry matter basis. In comparison to the Chicken Cuisine recipe, the food is also a bit higher in fat, with fatty acids from the fish and beef fat—both species-appropriate ingredients.

What did my cats think of this recipe? Both of my cats seemed to like the flaky consistency and mildly fishy flavor of Nom Nom’s Fish Feast.

How much does Nom Nom cat food cost?

That depends. Because it’s a subscription model, your costs will vary depending on a number of factors. How many cats you have, your cat’s calorie intake, and how frequently you want to receive shipments will all play into how much you pay for this subscription.

To get a sense of the general price range, I got a couple of quotes for a monthly subscription. A Nom Nom representative explained that a subscription for a single 5-lb cat would cost about $82.30 per month, while a 15-lb cat might pay close to $138.84 each month. That breaks down to between $2.74 and $4.63 each day.

Regardless of your unique situation, Nom Nom is definitely on the expensive side. But between the food’s ingredient quality, attentive support staff, and the convenience of a subscription, that added cost might be worth it.

Is Nom Nom cat food worth it?

Every aspect of my experience with Nom Nom was excellent. The ordering process was straightforward, the customer service team was prompt and accommodating at every turn, and the food itself was a hit with my cats.

If you’re willing to drop the cash for it, Nom Nom offers a few things that you can’t get from almost any other food on the market.

If you’re worried about feeding your cat lower-quality ingredients and the potential for diminished digestibility, contamination, and other unsavory qualities associated with feed-grade foods, the fact that Nom Nom cat food is human grade could be a selling point of its own.

With every recipe portioned out for your cat’s needs, Nom Nom simplifies portion control and makes it easy to ensure that your cat never gets too little or too much food.

And if you’re dealing with a picky cat, Nom Nom cat food is hard to beat. Cats seem to love the food’s texture, which has a chunky, rippable freshness that makes it more like table scraps than the formless fare most cats live on.

But Nom Nom isn’t perfect. While meat-based, their foods are by no means veggie-free and, in the case of Fish Feast, are a few grams starchier than they should be.

Besides that, you don’t get many options. When your only options are chicken and fish, it’s hard to accommodate cats with food intolerances and allergies.

Nom Nom cat food is only available through the company’s website. If you’re not ready to set up a subscription, you can order a no-strings-attached variety pack, which allows you to try both flavors without signing up for regular shipments.

Once you sign up, you can skip upcoming deliveries or cancel your subscription at any time. And if you’re not satisfied, you’re covered by Nom Nom’s care-grade guarantee.

Customers who don’t see a positive difference after 30 days will receive a full refund.

Nom Nom is currently only available to customers living in the contiguous United States.

Mallory Crusta is a blogger and adventurecat enthusiast who brings you the facts about cat products, wellness, and care. She's the co-founder of Wildernesscat, a resource for savvy cat guardians who want to give their felines richer, healthier lives. Visit Wildernesscat for product reviews, radically natural nutrition tips, and lifestyle inspiration 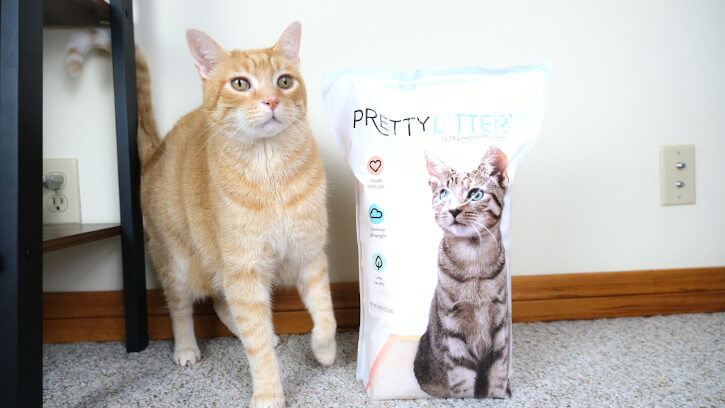 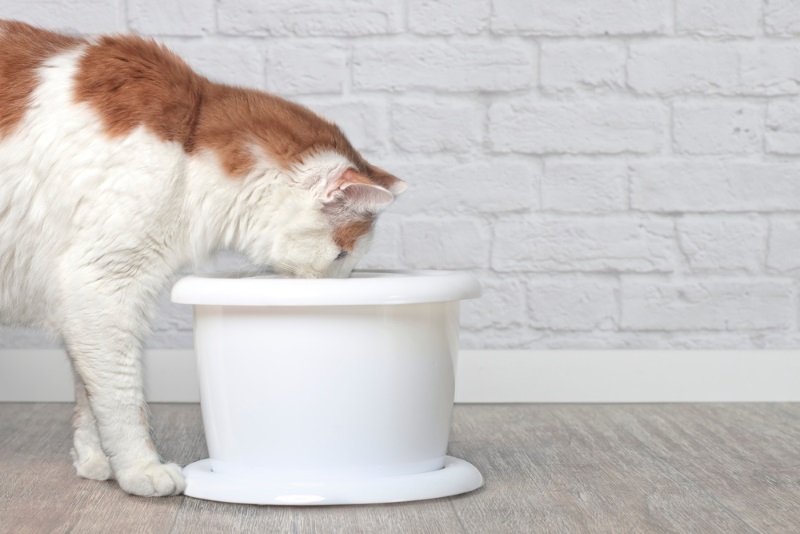 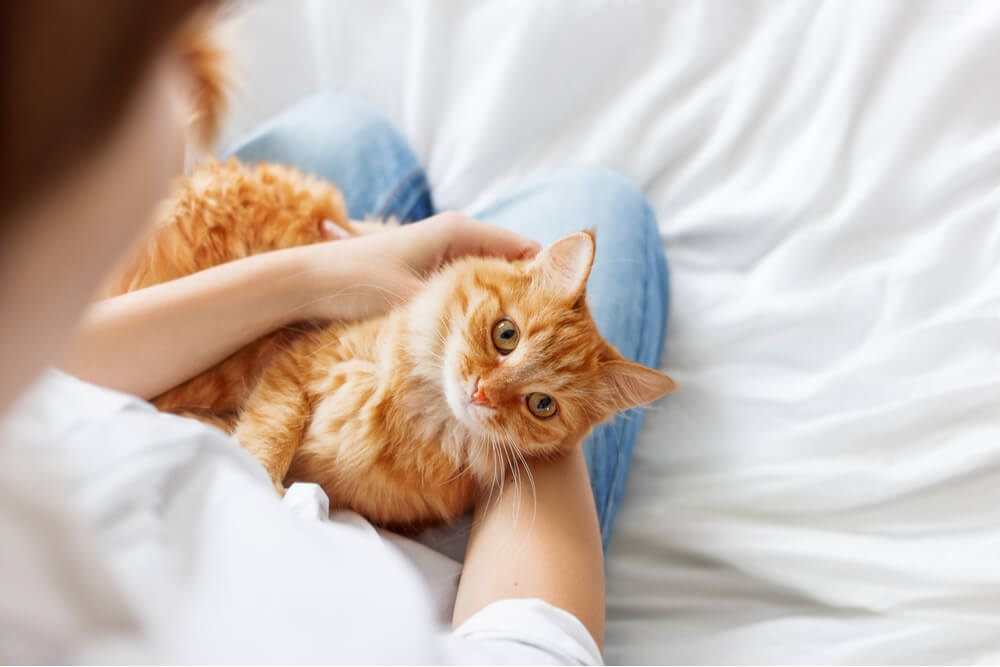 How To Care For A Hedgehog

How To Care For A Chinchilla

How To Care For A Gerbil