Easily one of the most popular pet reptiles out there, leopard geckos are easy to identify for their spotted coloration and large eyes. More than just unique in appearance, however, leopard geckos are an intriguing and entertaining reptile to keep as a pet.

If you’ve never fancied yourself a reptile lover before, the leopard gecko just might have you changing your mind. Read on to learn 10 reasons why leopard geckos make great pets.

#1. They Are One Of The Only Reptiles To Be Domesticated 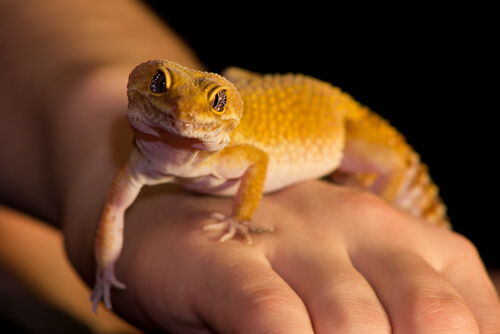 It’s never a good idea to keep a wild animal as a pet. For one thing, wild animals are likely to suffer in captivity and it may be more difficult to provide for their dietary needs. Familiar pets like dogs and cats were domesticated long ago but the same cannot be said for most reptiles.

The leopard gecko, however, is often referred to as the first domesticated lizard. Originally described in 1854, the leopard gecko has been extensively bred in captivity and is very popular in the pet industry.

When it comes to keeping reptiles as pets, this detail is important. Not only does it mean you’ll have no trouble finding a leopard gecko (one bred in captivity rather then caught from the wild, no less), but it also means this gecko is used to being around humans. 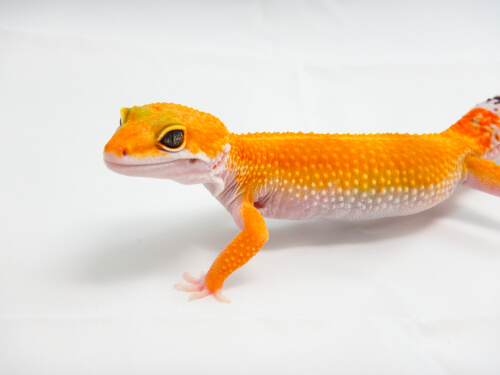 Size is important when it comes to choosing a pet, particularly a pet that will spend most of its life in its enclosure. It’s important to provide your pet with ample space, but that becomes a challenge as the size of the pet increases. Leopard geckos generally stay between 7 and 10 inches long.

If you’re looking for a pet reptile you can handle, size comes into play there as well. You don’t want a pet so small that you’re overly worried about injuring it and you don’t want it to be small enough that it can slip through your fingers. Neither do you want a pet that will be too heavy to hold. The leopard gecko is perfectly sized in this respect and relatively easy to care for as well.

#3. The Leopard Gecko Is Not Nocturnal Like Other Geckos 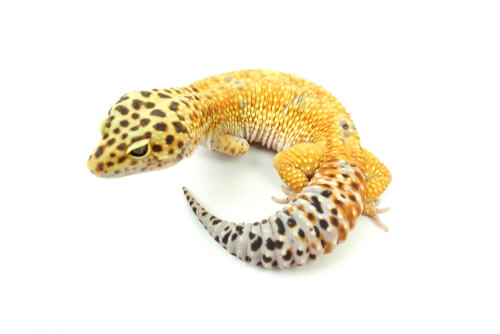 Geckos are known for their large eyes which are an adaptation commonly seen in nocturnal animals. There’s nothing wrong with keeping a nocturnal pet, it just means that your pet is most likely to be awake and active while you are asleep. Not so with leopard geckos.

For many years, leopard geckos were assumed to be nocturnal like others of their kind. It was eventually discovered, however, that they are active during the day. Leopard geckos have eyes that are large in proportion to their body, but not quite as large as other geckos. Also, they are one of the only gecko species said to have “true” or movable eyelids.

#4. Leopard Geckos Come In A Variety Of Colors 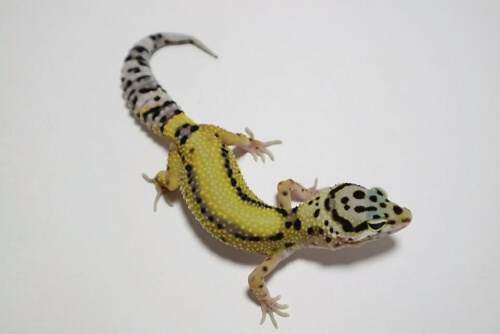 When choosing a pet, its appearance is likely to be a big factor. Leopard geckos perform well in this category because they come in a wide variety of colors and patterns.

Here are some of the most popular types of leopard geckos:

If you want to see the full array of leopard gecko colorations, your best bet is to check out a reptile expo – you’re not likely to find much variety at your local pet store. You can also work with a breeder directly if you have a particular variant in mind.

#5. They Do Not Require UVB Light 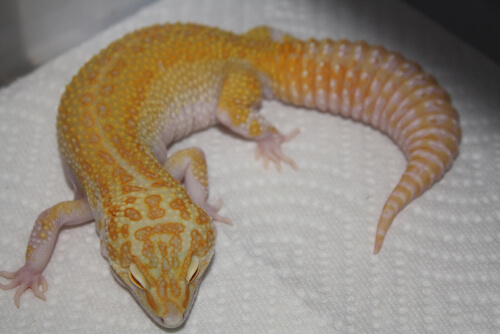 Many reptiles are unable to synthesize calcium, so they require exposure to UV light – particularly UVB light. Leopard geckos are unique in that they do not have this requirement. This makes things a little easier on you as a gecko owner, though a small amount of UVA and UVB lighting is recommended.

Though leopard geckos do not require as much UV light as other reptiles, they do still need a basking area. Your gecko enclosure should provide a temperature gradient with a basking temperature around 90°F with a cooler area in the 70s. 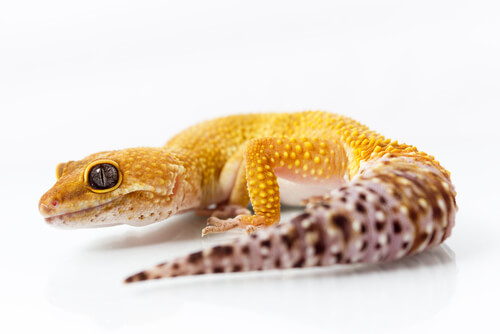 Personality varies from one animal to another, but leopard geckos are known for being fairly docile by nature. This is important if you want a pet you’ll be able to handle.

It’s important to know that leopard geckos aren’t like cats and dogs – they won’t show you affection and they won’t form the same kind of bond. With regular interaction, however, your gecko will learn to tolerate handling and may even seem to like it at times.

#7. Their Dietary Needs Are Fairly Simple 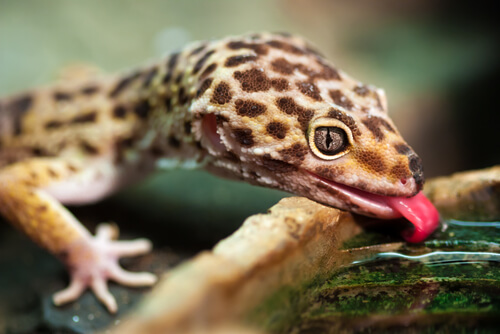 Geckos are primarily carnivorous animals but leopard geckos in particular follow a diet primarily comprised of insects. The key to a healthy diet for leopard geckos is variety. Different insects provide a different balance of nutrients, so you’ll need to change up what you feed your gecko.

While some pet reptiles can consume commercial pellets, leopard geckos really do best on a diet of live insects. It may be a little tricky to raise these yourself at first, but once you get the hang of it, you’ll have a nearly endless supply of live prey for your pet with minimal expense to yourself. 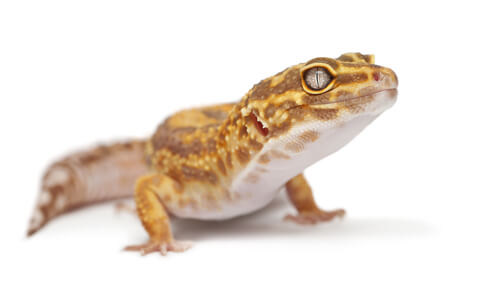 Becoming a pet owner is a big responsibility – you’ll be your pet’s caretaker for the duration of its life. With some pets, that responsibility is cut short, limited to just a few years. With a leopard gecko, however, you could enjoy your pet’s company for 10 to 20 years.

The key to maximizing your leopard gecko’s lifespan is to make sure all of his needs are met. Providing a suitable habitat is important, along with a balanced diet. Because your gecko has a longer lifespan than other lizards, you may also want to have him checked out by a veterinarian once a year. Leopard geckos don’t require annual vaccinations, but routine care is still important for long-term health.

#9. They Are Relatively Inexpensive To Keep As A Pet 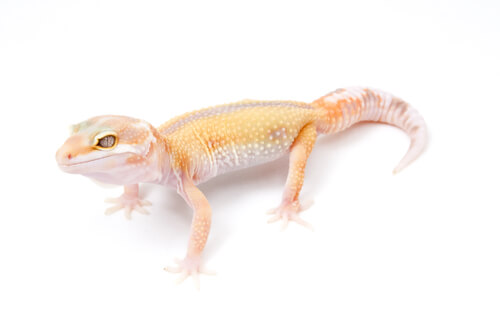 Before you choose a pet, it’s a good idea to do some research into the costs to make sure you can afford to keep the pet. With a leopard gecko, ongoing costs are fairly low – the biggest cost will be the price of your enclosure and the gecko itself.

When it comes to the cost to keep a leopard gecko, you can get a normal morph for under $50. More unique variants like tangerine, high yellow, or super giant may cost upwards of $100 but it’s entirely up to you whether you choose to make that investment. Because they are relatively small, leopard geckos only need 15 to 20 gallons of space, so you can probably purchase and equip your tank for under $200.

Reptiles can be tricky if you’re used to owning traditional pets like cats and dogs. They have specific requirements for heat and humidity, and their diet is much different as well. That being said, leopard geckos are one of the more beginner-friendly reptiles you can have as a pet.

One of the best things about leopard geckos for beginners is that they are naturally docile and amenable to handling. These reptiles don’t have the same requirements for UV lighting as other reptiles and their diet is fairly simple as well – you just need an assortment of insects. Compared to other reptiles, leopard geckos aren’t particularly expensive and they have a longer lifespan than many pet lizards.

Is A Pet Leopard Gecko Right For You?

If you’re new to pet ownership or at least to reptile ownership, the leopard gecko could be a good choice. They even make a good option for older, responsible children.

Leopard geckos are a medium-sized reptile – they generally grow 7 to 10 inches long. That makes them a good size for children (they’re not small enough to slip away but not too heavy to hold). They are also quite docile by nature and tolerant of handling if you do it regularly.

Though leopard geckos themselves are pretty easy-going, they do have specific requirements for care you should consider before bringing one home.

Like all reptiles, leopard geckos are cold-blooded which means they rely on their environment for warmth. Your gecko will need a suitable enclosure with ambient heat as well as a baking area. Lighting and humidity are also important for leopard geckos, so you’ll need to invest in some equipment to maintain the ideal environment for your new pet.

Leopard geckos are naturally pretty docile which makes them a great choice for beginner pet owners, including children. That being said, they still need to be handled properly and with respect.

Do leopard geckos get lonely?

No. Like most reptiles, leopard geckos are solitary animals, and they should not be kept with other reptiles. You may be able to keep two leopard geckos together if you provide enough space.

Why do leopard geckos lick you?

When a leopard gecko licks you, it isn’t the same as a dog licking you – it’s not a sign of affection. Generally, leopard geckos lick something to get a better sense of their surroundings through taste or smell.

Generally speaking, leopard geckos are docile reptiles that do well with handling. That being said, they may not enjoy it as much as a dog or a cat enjoys being pet. With regular handling, however, your leopard gecko will learn to tolerate it.

Leopard geckos can bite but it is fairly uncommon. These reptiles are docile by nature and will generally only bite if they feel threatened. Even in that case, a leopard gecko is more likely to flee from a threat than to fight. 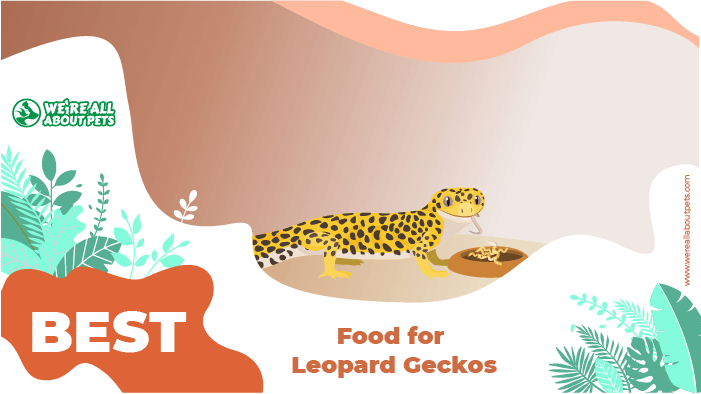 The 5 Best Food For Leopard Geckos 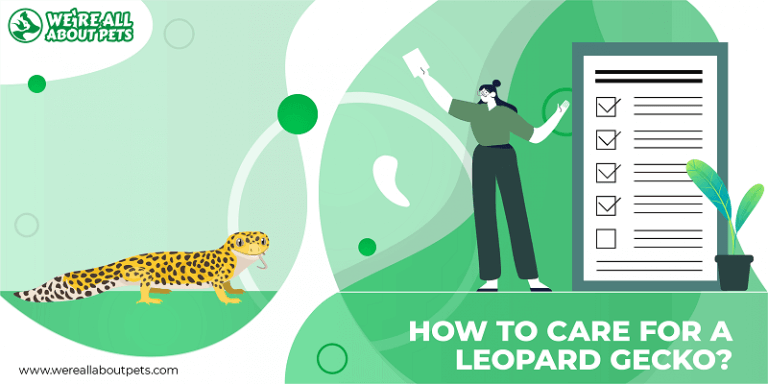 How To Care For A Leopard Gecko 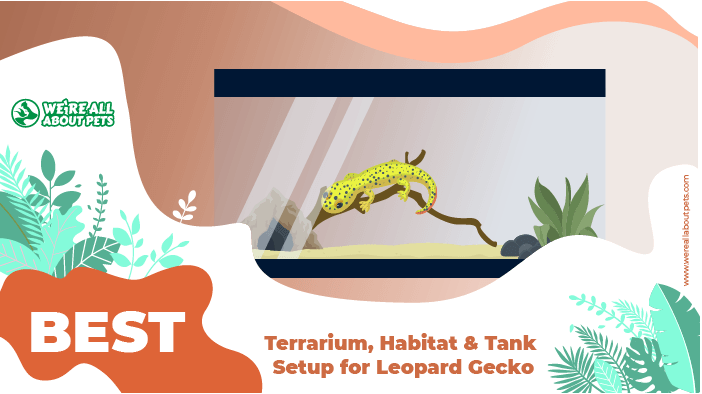 The 5 Best Food For Leopard Geckos

How To Care For A Leopard Gecko