9 Types of Hermit Crabs You Should Know 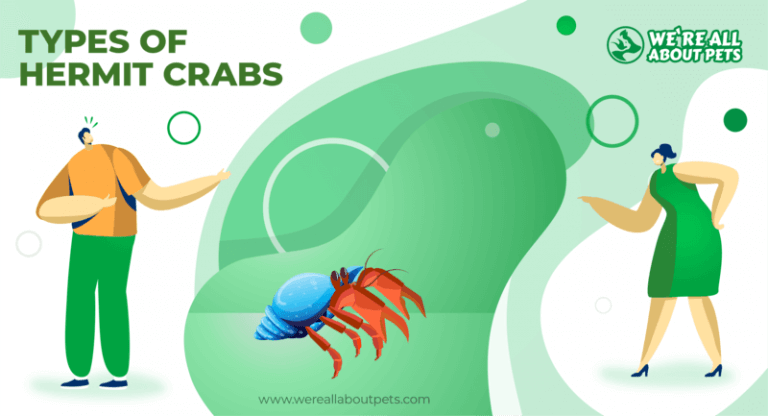 9 Types of Hermit Crabs You Should Know

There are plenty of different pets out there to choose from, but one that is often overlooked is the hermit crab. Hermit crabs are more unique and entertaining than many people think, and they are a low-maintenance pet as well.

What you may not realize is that there are many different types of hermit crab and it’s important to know what type you have so you can provide for its needs appropriately. Read on to learn more about the 9 most common types of hermit crabs kept as pets.

When you picture a hermit crab, the species you’re probably thinking of is one of 17 species in the genus Coenobita. This genus is made up of terrestrial hermit crabs.

Here’s a quick overview of some of the most popular types of hermit crab: 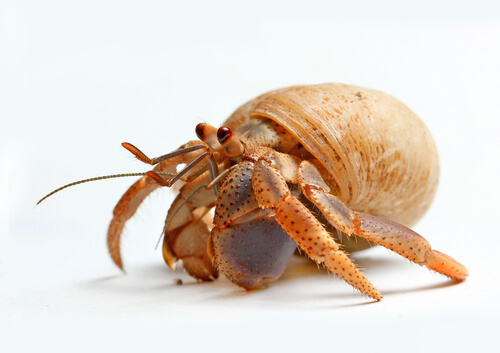 The most common type of hermit crab in the pet trade, the Caribbean crab has many nicknames including West Atlantic crab, tree crab, soldier crab, and purple pincher crab. These hermit crabs typically have a deep purple or brown body and legs with some red or orange coloration and a tan-colored head. Another feature that distinguishes them from other species is their round eyes.

Caribbean hermit crabs are native to the West Atlantic and can be found throughout the Bahamas as well as Belize, southern Florida, the Virgin Island, the West Indies, and Venezuela.

This particular species of hermit crab is both an herbivore and a scavenger. Caribbean hermit crabs typically feed on plant and animal remains in the wild, including overripe fruit and decaying vegetation as well as animal feces. They typically choose shells from the West Indian snail as their homes. 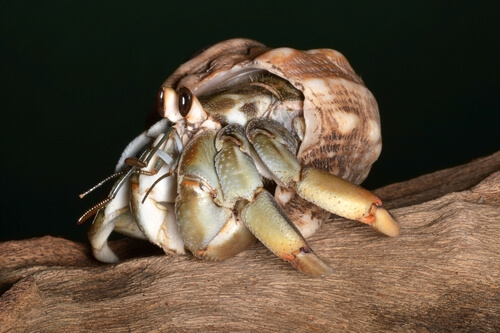 Ecuadorian hermit crabs have four walking legs as well as a small and large pincer. They are quite active and can move more quickly than Caribbean hermit crabs. This species has oval-shaped eyes and the tips of their walking legs are darker in color than the rest of the leg. These crabs are typically tan in color but can also be found in bright colors like yellow or orange.

The Ecuadorian hermit crab is very particular when choosing its shell. They tend to prefer shells that have a wide, round aperture. Avoid giving your hermit crab painted shells because they may eat the paint and it can be very toxic for them.

One thing to know about this and other hermit crab species is that they can be very long-lived. Ecuadorian hermit crabs have been known to live 30 years or more. 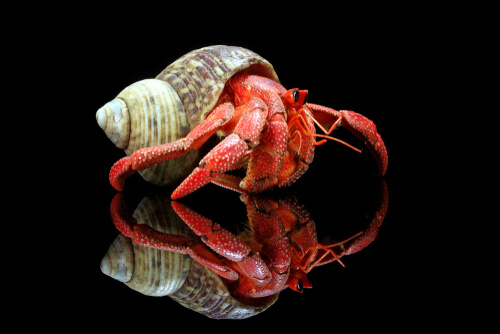 As you might expect from the name, the strawberry hermit crab is known for its reddish coloration. These hermit crabs are bigger than Ecuadorian hermit crabs but not as large as Caribbean crabs. They measure up to 3 inches in length and weigh up to 2.8 ounces.

The strawberry hermit crab is native to the Indo-Pacific region and can be found from Indonesia, Mauritius, and Seychelles in the west all the way to Samoa in the east.

Strawberry hermit crabs like to keep a supply of water in their shells. They make a nightly trip to the sea to refresh their water store, though they require freshwater as well as saltwater because they use osmoregulation for hydration. They regulate their body temperature and avoid water loss by burying themselves deep in the sand during the heat of the day. 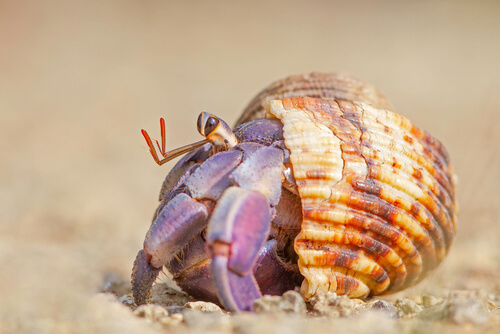 Similar to the previous type of hermit crab, the blueberry hermit crab is named for its color. As you can imagine, these crabs are typically blue, though they sometimes take on a purplish hue.

Blueberry hermit crabs are often white or cream-colored when young but develop a strong blue or purple coloration as they mature. They are native to Japan and can be found along a narrow strip of islands from Japan to Malaysia.

The blueberry hermit crab is a little more active than some species and can be a big food aggressive. They prefer oval-shaped shell openings but will accept turbo shells as well. They typically grow less than an inch in length, but usually over ½ inch. 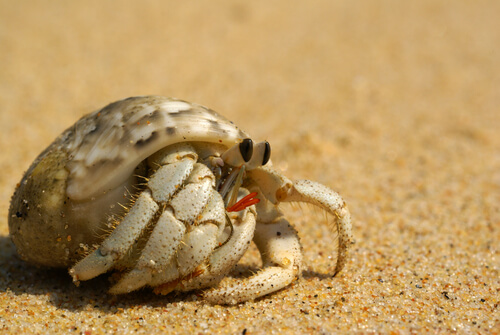 Affectionately known as the ruggie, this hermit crab species is very similar to the Ecuadorian hermit crab in appearance except a few significant differences. These crabs come in a variety of colors including black, tan, blue, gray, and even white but they are uniform in color, not varied like the Ecuadorian crab.

Ruggie hermit crabs are native to Indonesia and Australia as well as the east African coast throughout other parts of the southwest Pacific. These crabs grow a little larger than Ecuadorian hermit crabs, but still usually stay under 1 inch in length.

This hermit crab species has a short, fat abdomen with pronounced striations on their large pincer. The big claw also has 7 ridges on the upper part, and there is hair on the inside of both claws. 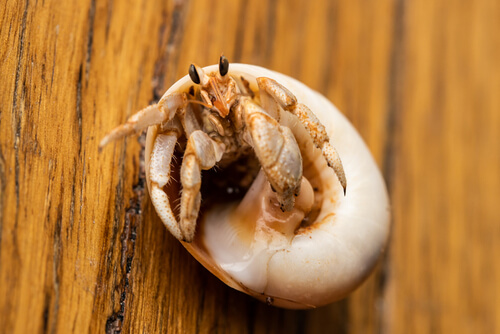 The Australian hermit crab is native to Australia and can be found in tropical areas near the water. These crabs are medium-sized, growing to about 1 ½ inches in length. They are very close in appearance to the Ecuadorian hermit crab, both of which have a short aquatic development stage.

Australian hermit crabs are usually light brown in color with two dark ovals on the front of their head. They have long eyestalks the same color as the body with a short, fat abdomen. Their claws each have a dark vertical stripe and the legs are spotted with dark brown.

The Coenobita violescans hermit crab is purple in color, often appearing in various hues of violet. These crabs are native to Indonesia, Thailand, Cambodia, Tanzania, and the Philippines.

While their overall coloration ranges from light lavender to dark violet, these crabs have a dark patch of brown on the lower surface of the left pincer. Juveniles are usually pale orange or red, but the color darkens as the crab matures. The eyes are elongated and the eyestalks almost completely black. 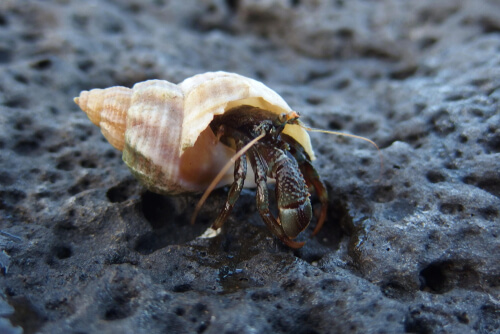 Sometimes called the passionfruit hermit crab, this species is native to the eastern parts of Africa but can also be found near Indonesia, China, Japan, Malaysia, and the Philippines. They are so named because in addition to using empty turbo shells, they will sometimes use a hard passionfruit.

These hermit crabs are usually a mottled brown or blue-grey color with a lighter color on the pincer. They grow up to about ½ inch in length and were misidentified as Coenobita violescens until 2007. 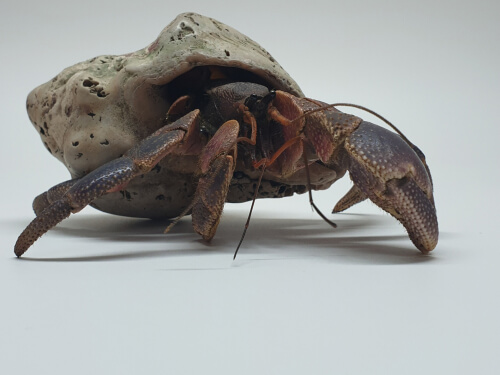 Also known as the Indos hermit crab, the Indonesian hermit crab is named for the Latin term “brevis” meaning small and “manus” meaning hands. It gets its common name for being found throughout the Indo-Pacific region.

The Indonesian hermit crab is one of the larger species, with adults growing up to ½ pound in weight. These crabs are darker than many hermit crabs, though they are typically red in the juvenile stage. As the crab matures, they develop a brown stripe down the middle and the body transitions to a gray color.

The Benefits of Owning a Hermit Crab

One of the primary benefits of hermit crabs as pets is that they are very inexpensive. The cost to keep a hermit crab really comes down to spending a few dollars on the crab and setting up a simple terrarium.

You may want to keep a few extra shells around, but these pets don’t require a lot of equipment to maintain their habitat and they’ll eat just about anything.

Here are some of the benefits of hermit crabs as pets:

Though hermit crabs are definitely easier to care for than many other pets, it’s important to understand that there is still some effort required. You’ll need to provide an optimal habitat for your hermit crab as well as a healthy diet. These are just the most basic components of proper pet care.

What To Know Before Getting A Hermit Crab

Before you decide to get a hermit crab as a pet, you need to understand the basics about them and their care. First and foremost, know the difference between terrestrial and aquatic hermit crabs.

Terrestrial hermit crabs are the type you’ll find at stores at the pier on your beach vacation. You can find pet hermit crabs in many pet stores as well, but you’re less likely to see aquatic or saltwater hermit crabs.

Aquatic hermit crabs make an excellent addition to a saltwater tank environment because they act as scavengers, helping eat leftover food and other detritus but they are very different.

Here are some other important things to consider for pet hermit crabs:

Being a pet owner is a big responsibility and not one you should take lightly. If you’re looking for a pet you can enjoy but you’re not sure what level of responsibility you’re ready for, a hermit crab could be a good choice.

Take what you’ve learned here to decide which type of hermit crab to get. 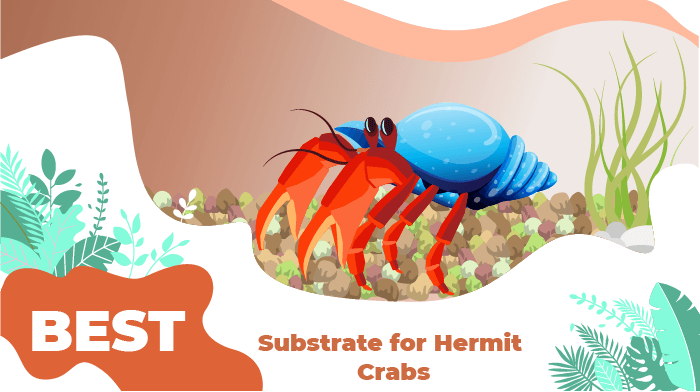 The 5 Best Substrates For Hermit Crabs 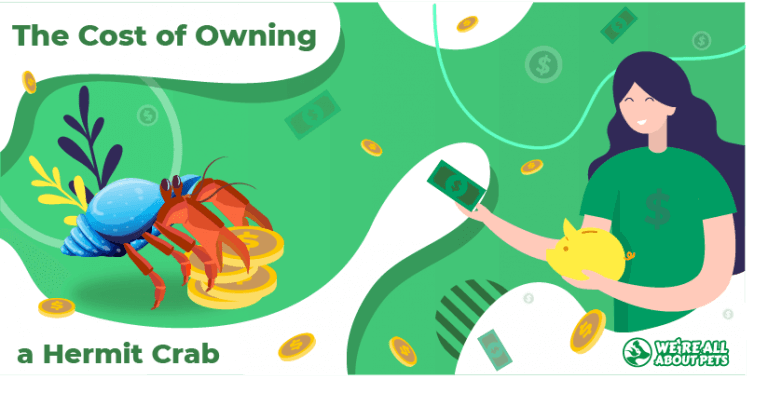 The Cost Of Owning A Hermit Crab

How To Care For A Hermit Crab

The 5 Best Substrates For Hermit Crabs

The Cost Of Owning A Hermit Crab

How To Care For A Hermit Crab