The 9 Different Types Of Ferrets 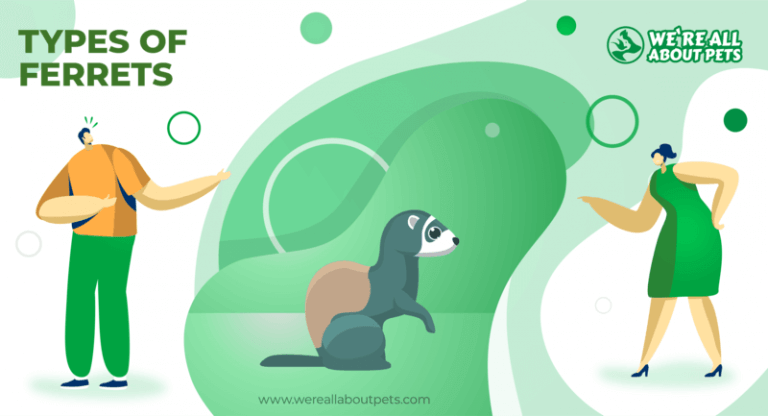 The 9 Different Types Of Ferrets

Even if you know nothing about them, you know what ferrets look like. These furry animals have long bodies, short legs, and dark masks over their eyes that make them distinctive from other pets.

While some of the more traditional pets like cats and dogs come in a variety of breeds, the pet ferret doesn’t. Ferrets are actually a domesticated form of a mammal related to the weasel, so there is only a single species. That being said, there are a variety of different colors. Read on to learn more.

You won’t find ferrets in the wild but may come across an animal that looks like them. The ferret is a domesticated form of the European polecat (Mustela putorius) which is native to northern Morocco and western Eurasia. Like their relatives, ferrets are usually dark brown with a pale belly and dark face mask.

Though there is only one species of ferret, there are many different ferret colors and patterns. The American Ferret Association has identified four basic colors: sable, albino, dark-eyed white, and silver. All other ferret colors are a variation of one of these four basic categories.

Here’s a quick overview of some of the different types of ferrets: 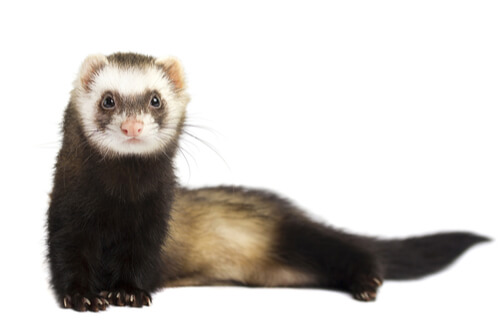 The most common color seen in ferrets is the sable color and variations on it. This is the typical brown ferret with a top layer of dark brown guard hairs with a lighter undercoat that varies from white to cream, even gold in color.

The black sable is a popular variation of this color. Black sable ferrets have dark blackish brown guard hairs with the same light or white undercoat. It’s very rare to see completely black ferrets – they almost always have a light-colored undercoat. 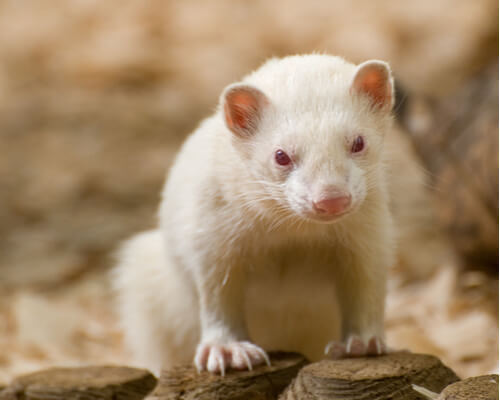 A true albino ferret is white or cream-colored with red eyes or pink eyes and a pink nose. Ferrets that  have white fur but don’t have red eyes and noses are not true albinos but more likely a dark eyed white or black eyed white ferret. 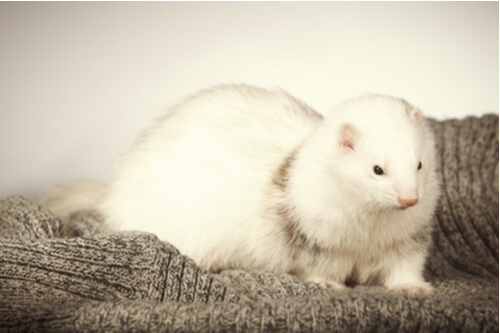 Dark-eyed white ferrets have white to cream-colored fur with dark burgundy eyes. White ferrets were preferred during the Middle Ages because the white coat was easier to spot in the undergrowth. 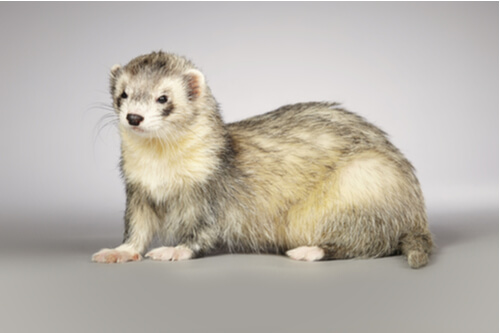 The roan pattern or silver ferret is any ferret (excluding albino ferrets) in which 50% or more of the guard hairs are white. In most cases, this type of ferret gains more white guard hairs each time it sheds – this process is called “roaning out.” White fur may appear in a variety of locations on the body such as the white feet, legs, and tail. White patches under the neck are called a white bib. 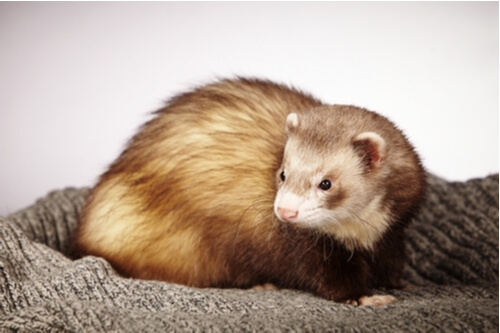 As you can probably imagine, the chocolate ferret color is largely brown. This ferret type has a milk chocolatey appearance to it with a rich brown topcoat with a white undercoat. The eye color is usually dark brown or black with a brown or pink nose. 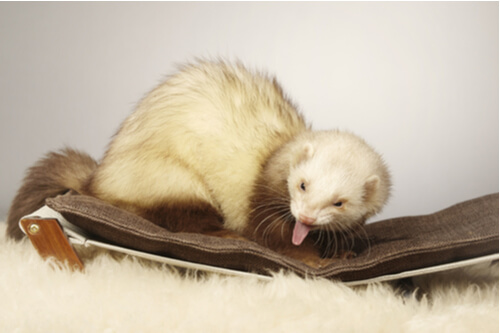 This particular color is not recognized by the American Ferret Association but is still fairly popular. Cinnamon ferrets are fairly uncommon and have an overall light brown to reddish-brown guard hair coloration. The undercoat ranges from white to golden in color and the nose ranges from beige to pink to red. Champagne ferrets are sometimes referred to as diluted chocolate ferrets because they have an overall brown color but in a lighter hue. These ferrets have light brown guard hairs and white to cream undercoats with light-colored eyes, though they are sometimes red in color. 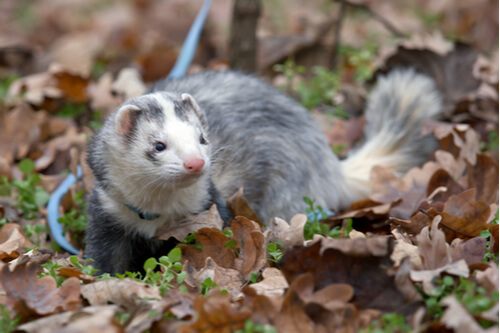 As you can probably imagine, panda ferrets exhibit contrasting head and body colors much like a panda. The darker color is typically found on the hips and shoulders with light-colored mitts on the feet. You may also see white fur on the tail and many panda ferrets have colored rings around the eyes. The name mutt simply refers to ferrets that have a variety of colors and patterns. Mutt ferrets can have a white head with a solid body, spots or stripes, or any combination you can imagine. It’s a bit of a catch-all name for ferrets that exhibit more than one feature.

There are simply too many different colors of ferrets to describe, but here are some of the other color patterns you may come across:

The Benefits Of Owning A Pet Ferret

Not only are ferrets beautiful animals, but they make wonderful pets as well. Like all pets, however, keeping a ferret healthy and happy is a responsibility and a privilege. Take the time to learn the basics of proper ferret care before you commit to make sure you are able to provide for your new pet’s needs.

Though ferrets can certainly be challenging at times, they are also an absolute joy.

Here are some of the benefits ferret owners may experience:

Ferrets are smart and entertaining pets, but they aren’t the best choice for everyone. These pets are not ideal for families with small children or for households with other pets that might chase the ferret.

Read on for some more important facts to know about ferrets.

What To Know Before Getting A Ferret?

If you’re an experienced pet owner, you already know the basics of providing your pet with a healthy diet, plenty of exercise, and all the love he needs. Unless you’ve owned a ferret before, you may not know what you’re getting into.

These pets can be challenging at times, but it is well worth it.

Here are some other important things to consider for pet ferrets:

Whether you’re looking for a furry friend that will keep you company or an active pet that will provide endless entertainment, the pet ferret is well worth considering.

Take what you’ve learned here to decide which type of ferret to get then check out our other guides to get started with your new pet! 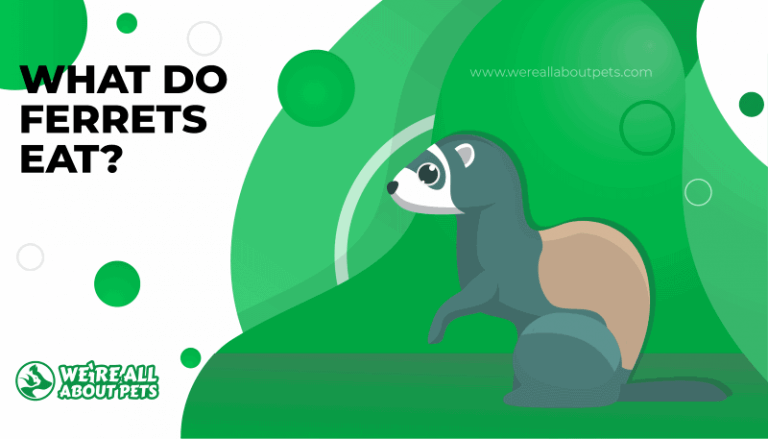 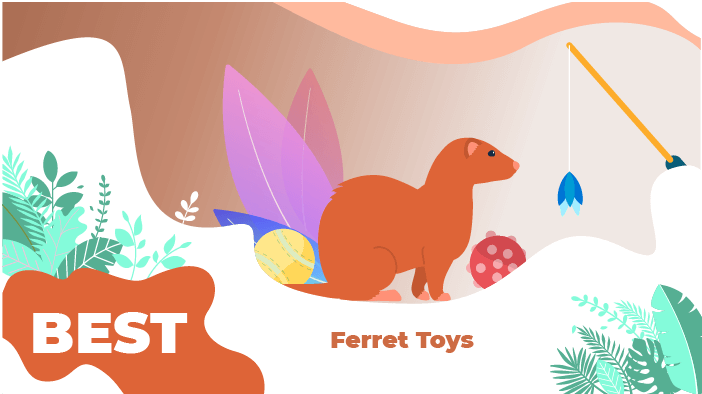