54 Powerful Pets Statistics You Need To Know In 2021

Pets bring fun, friendship, and love to our lives. They never judge, they’re quick to forgive our little missteps, and they’re always there for us when we need them. It’s no surprise that about 85 million American families have pets – that’s a stunning 67% of all households across the United States!

Check out our pet statistics infographic – then keep reading for even more great info to fuel your curiosity!

21 Most Fascinating Pet Statistics From The Infographic 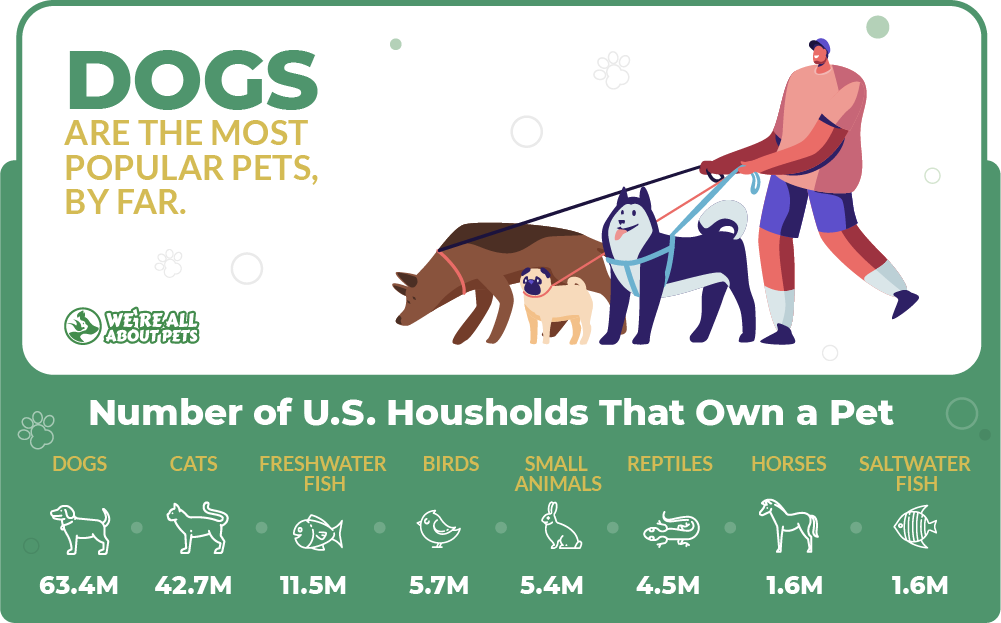 Freshwater fish, birds, small animals, and reptiles come in next. Horses and saltwater fish are tied for last place – each are claimed by approximately 1.6 million homes.

2.  Pets help us feel better – and they might even help us enjoy better health. A study showed that college students who spent just 10 minutes enjoyed reduced levels of the stress hormone cortisol. Interacting with pets can reduce anxiety and promote a sense of calm, too! 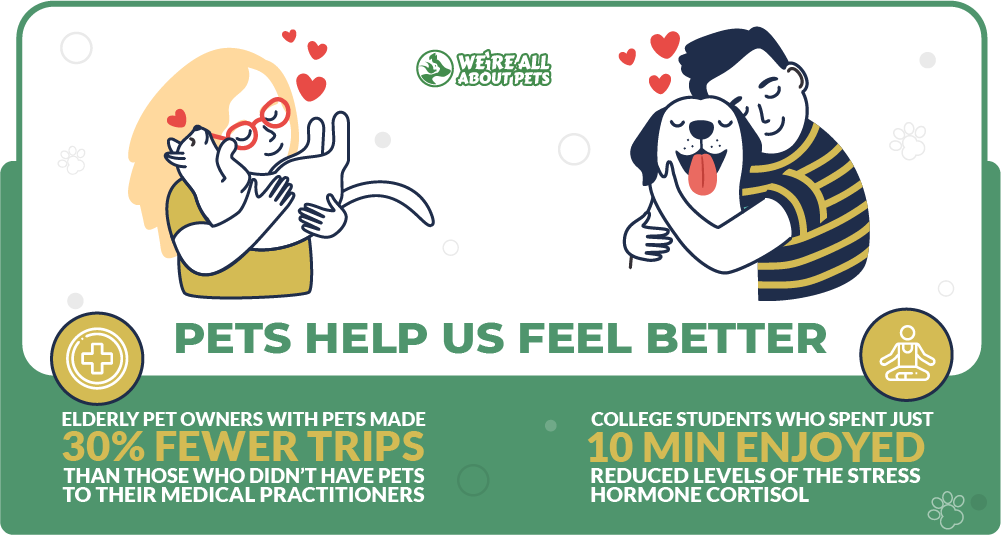 That’s not all. Elderly pet owners with pets made 30% fewer trips to their medical practitioners than those who didn’t have pets. Another study – this time from Sweden – showed that owning a dog might reduce the risk of death from any cause by 24%, and death from heart disease by 36%.

3. Cats seem to have an instinctual ability to find the purr-fect home. Approximately one third of all pet cats are found as strays and adopted! 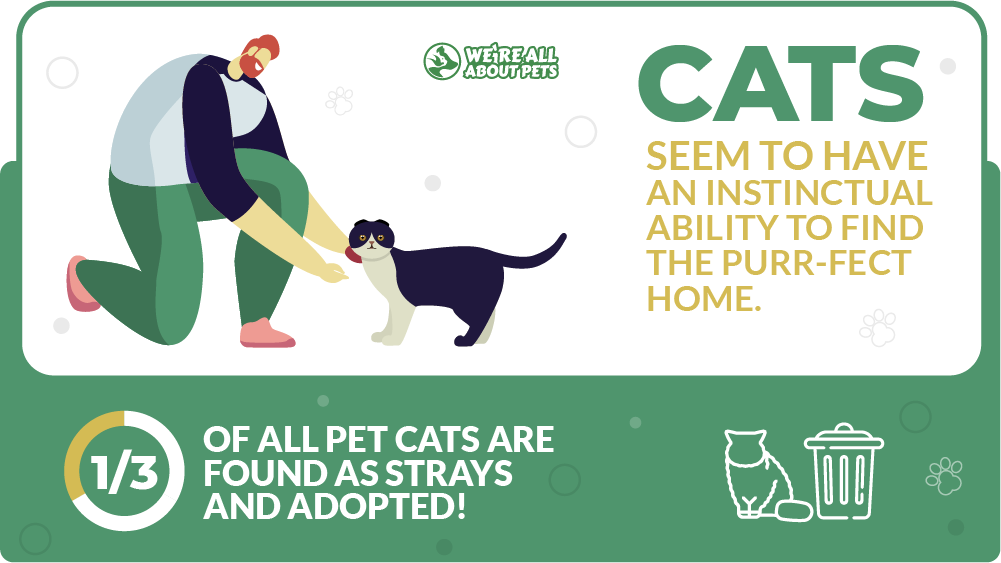 4. While cats are usually dedicated homebodies, dogs tend to enjoy lots of exciting adventures. About 75% of all dog-owning households take their canine companions along for rides. About 34% of those prefer to bring their dogs along on family vacations, too! 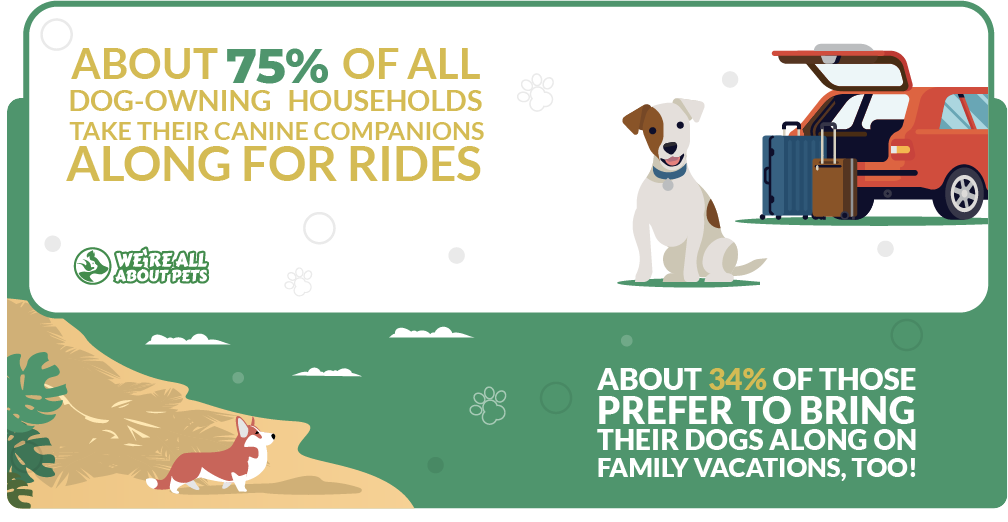 5. Pet statistics aren’t always about fun and games. There are approximately 14,000 animal shelters and rescue groups throughout the U.S. Together, they shelter approximately 6.5 animals per year. Of those, 30 percent were dropped off by their owners.

6. Shelter pets face uncertainty but for many, the final outcome is positive. In 2019, approximately 710,000 pets were euthanized of the estimated 6.5 million that entered shelters. Of these, more cats were put to sleep than dogs. 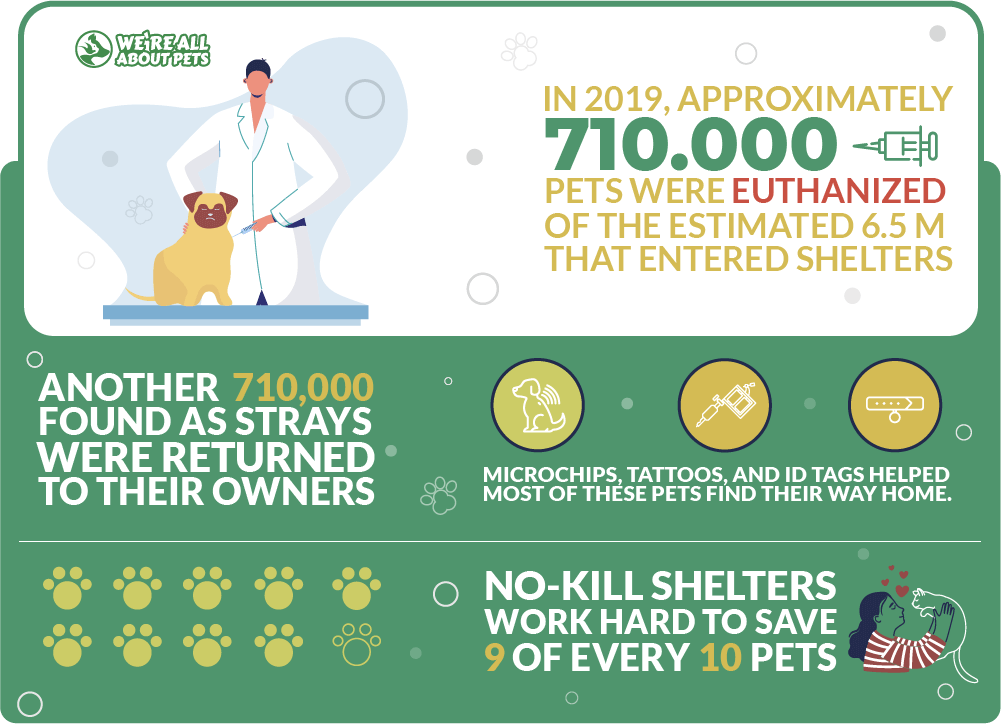 Another 710,000 pets found as strays were returned to their owners. Microchips, tattoos, and ID tags helped most of these pets find their way home.  (source: https://petpedia.co/animal-shelter-statistics/)

7. No-kill shelters do all they can to save pets and find appropriate forever homes. These shelters work hard to save 9 of every 10 pets that come through their doors. 9. A study of pediatric patients who were diagnosed with cancer showed that 60 children who received 20-minute visits from therapy dogs had less disease-related anxiety than 46 children who did not interact with therapy dogs. Both groups of children had anxiety and worries related to their cancer, but those in the group that interacted with the therapy dogs did not show a marked increase in anxiety over time. It was also showed that dogs can help support Montessori educational Learning for kids. 11. A full 58 percent of people who responded to a survey about therapy animals and the general benefits of pet ownership said that they felt they should be allowed to bring their pets along to work.

12. Assistance Dogs International released pet therapy facts in 2018 noting that 48% of all therapy dogs primarily helped people achieve better mobility, 23% of therapy dogs helped people with autism, and another 19% of therapy dogs were tasked with helping veterans who suffer from PTSD. Of the remaining therapy dogs in the statistics study, 4% were diabetic alert dogs and the final 2.5% were seizure service dogs.

14. A 2003 study of 15 nursing home residents with dementia had the patients interact with therapy animals every day. At the end of the first three weeks, the test participants showed a marked decrease in agitation. At the same time, they displayed a significant increase in their social interactions.

15. Pets and therapy animals might help the people they interact with by reducing pain. A 2009 study from Chicago’s Loyula University found that adults who were recovering from total joint replacement surgery needed 50% less pain medication when they were part of a canine therapy program.

16. Animal-assisted therapy statistics show that even though AAT is on the rise these days, it’s really nothing new. Dr. Boris Levinson pioneered animal assisted therapy in 1960. By 1971, after his book “Pet-Oriented Child Psychulogy” had been released and widely read, he surveyed 319 psychulogists. Of those, 16% had begun to use companion animals to make therapy sessions more productive.

17. On average, dog owners spend just $400-$700 per year on food, supplies, training, and medical care for their dogs. Pet adoption statistics show that the initial adoption fee for a shelter dog or rescue dog averages $200, with lower and higher prices in some areas and for some breeds. 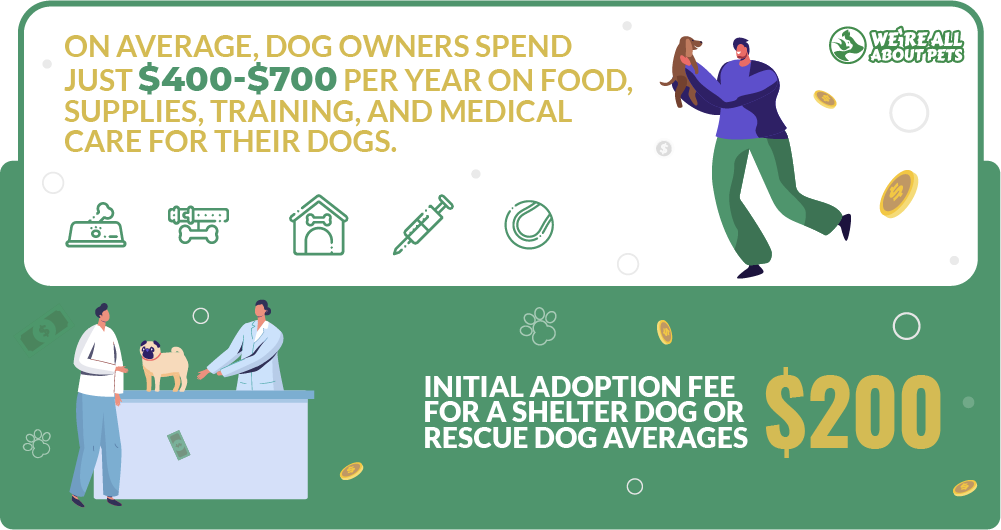 18. Curious about the most common shelter dog breeds? Here are 10: 19. People who want to adopt a new dog often look for specific breeds. The most commonly searched breeds include: 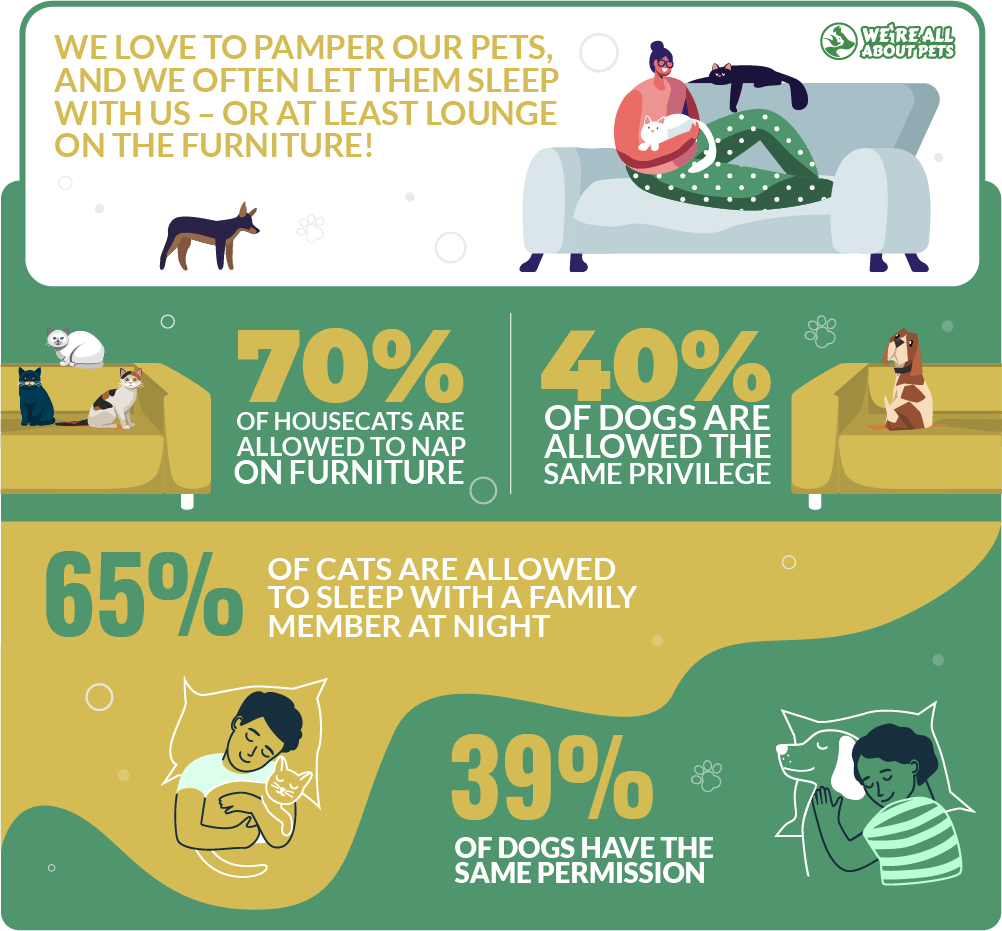 21. One of the most heartwarming pet facts we’ve found: A full 94% of families with autistic children report that their children bond with pets, and that pets help children learn important lessons about responsibility and companionship. The same study showed that pets also help reduce sensory sensitivity in children with autism and increased their desire to form connections with other people.

And – Just in case you missed it – here are the rest of the talking points we covered in our pet statistics infographic! 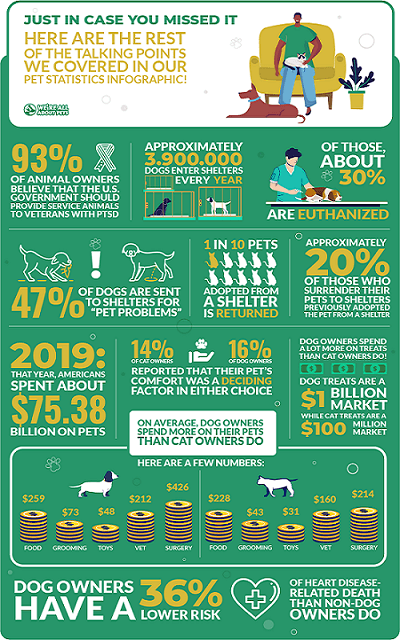 Did you enjoy the pet statistics information we curated in this article? If so, why not reach out to others who love pets? Feel free to share our infographic or link to our post.

That’s it for now! We hope you’ve enjoyed our pet statistics as well as our look into stats surrounding pet therapy and pet adoption. If there’s just one takeaway, it’s this: People and pets help each other in so many ways – and considering the fact that studies surrounding the ways pets benefit people are fairly new, the future is likely to show even more exciting discoveries!

P.S. Remember to share our pet statistics infographic if you enjoyed it – we’d love to help raise awareness far and wide.